In order to be successful in an action for tort, the plaintiff has to prove that there has been a legal damage caused to him. In other words he has to prove that there was a wrongful act or omission causing breach of legal duty or violation of legal right vested in the plaintiff. Unless, there has been violation of a legal right, no action can be taken in law of torts even though the plaintiff has suffered monetary and other types of loss. This proposition is expressed by the two maxims Damnum sine injuria and Injuria sine damno.

Ashby V White is the leading example explaining this maxim. In this case, the plaintiff who was a qualified voter at a Parliamentary election, was denied to caste his vote by an election officer i.e defendant. No loss was suffered as the candidate for whom the plaintiff  wanted to vote won the election. It was held that the defendant is liable as the plaintiff’s legal right i.e right to vote was infringed. Similarly,

In  Bhim Singh V State of Jammu and Kashmir an MLA of Jammu and Kashmir Assembly was wrongfully arrested by the police when he was going to attend the Assembly session. In addition, he was not produce before the magistrate within the requisite period prescribed in law. As a result, he was deprived of his constitutional right of attending the Assembly session. The fundamental right of personal life and liberty prescribed by Article 21 was also violated. The defendants were held liable and as a consequential relief Rs 50,000 were awarded to him.[3]

In the above maxim Damnum means substantial harm, loss or damage in respect of money, comfort, health or the like, sine means without and injuria means violation of legal right. So, it means damage which is not coupled with any infringement of plaintiff’s right. Causing of damage to another person is not actionable in law unless there is also violation of legal right of the plaintiff  So, when there is no violation of legal right, no action can lie in a court of law even though the defendant’s act has caused some losss, damage or harm to the plaintiff. The reason for the same is that if interference in the rights of another person is not unlawful but a necessary condequence of the exercise of his own right by the defendant, no action should lie. For instance, if I’m a owner of a shop and some other person opns a shop in front of my shop due to which I suffer losses I can’t go to the court suing him and asking compensation on the plea that I suffer losses due to the defendant. In the given case though the defendant had caused me some damage or loss but my legal right isn’t infringed, so I can’t bring an action against him in court. 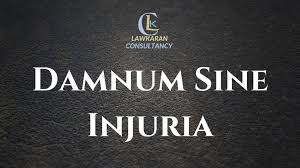 In  Gloucester Grammar School case, the defendant i.e the headmaster set up a rival school near the plaintiff’s school. Because of the competition the plaintiff has to reduce the fess of school from 40 pence to 12 pence per quarter and suffered huge monetary loss. In an action by the plaintiff for the damages, the court held that the defendant was not liable and the plaintiff has no remedy for the loss suffered by him as there was no violation of legal right of plaintiff.

In  Acton V Blundell, the defendants in carrying on mining operations on his field ended up draining the water from the land of plaintiff through which the water flowed in a subterraneous course to his well. In an action for damages by the plaintiff, it was held that the defendant was not liable and need not to pay any damages to plaintiff as defendant was exercising his private right i.e right to enjoy property.

In  Bradford Corporation(Mayor of) V Pickles Corporation of Bradford was supplying water from its well. Defendant owned adjoining land to the land from where the Bradford Corporation was supplying water and had dug up a well. He approached the Mayor of the Bradford Corporation to sell his land but the negotiations failed. Then, the defendant sank a shaft in his own land which diminished and discoloured the water flowing to the plaintiff’s land. This had cause monetary loss to the corporation. The plaintiffs also alleged that the sole purpose of the same was to cause damage to plaintiff as they did not buy defendant’s land  at a high price. In an action by the plaintiff for injunction and damages, it was held that the defendant was not liable as he was exercising his own right i.e right to enjoy property and it had not violated any legal right of plaintiff.

Injuria sine damnum means that even if an act doesn’t causes us any harm, loss or damage we can still bring an action in court if that act infringes our legal right. For instance if during election I go to caste my vote and an election officer refuses to take my vote without any valid reason. Later the candidate for which I wanted to vote wins the election. Even though no harm or loss has been incurred in this case still I can bring an action against the election officer as right to vote is my legal right and by refusing to take my vote he infringes it. It doesn’t matter whether as a result of such act a loss or harm is caused or not. Damnum sine injuria on the other hand states that even if by a person’s act we suffer any damage, harm or loss, we can’t bring an action against him in court unless our legal right have been infringed by such act. For instance if a person opens a school in front of mine and because of that many students from my school took admission in his school and as a result I inccur huge losses or damages, I can’t bring an action against him even he delebarately does it to cause me harm, because by setting up of a school he doesnt’t violate any of my legal rights. So, no remedy can be granted in such cases whicch doesn’t involve infringement of legal right of an individual.

Vaccination in the US: All adults are now eligible for COVID vaccine

COVID cases will be on its peak in 15 days, IIT professors