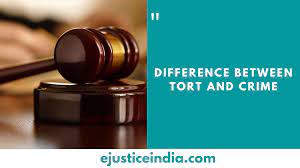 Since tort is a private wrong, the injured person himself has to file a case in court of law to seek remedy. On the other hand, as crime is a public wrong and it affects the people at large, the proceedings against the wrongdoer can be brought by the state instead of by the victim. Also in tort one the injured party alsways has an option of compromise with the wrongdoer and he/she may withdraw the case filed by him anytime. While in crime except in offences mentioned in Section 320, CRPC, 1973 the law doesn’t permit any type of compromise or settlement between the victim and the wrongdoer.

In case of tort, justice is given to the injured party by way of compensation The idea behind giving the compensation is to make good the losses suffered by the plaintiff and to place him in the same position he was before the wrongdoing. On the other hand, in crime the justive is met by punishing the offender and imprisoning him to prevent him from committing  further offences inimical to society.

(c) In tort, parties are free to compromise at any stage while in crime out of court of settlement or compromise, is not permitted.

(d) In tort, justice is met by compensating the injured party, while in crime, justice is given by punishing the wrongdoer.

(e) In tort the main idea is to make good the loss and place the injured party in a condition that he was before the happening of wrongful act while in crime the main idea is to prevent the offender from committing another crime inimical for society.

How to draft a legal notice for breach of contract