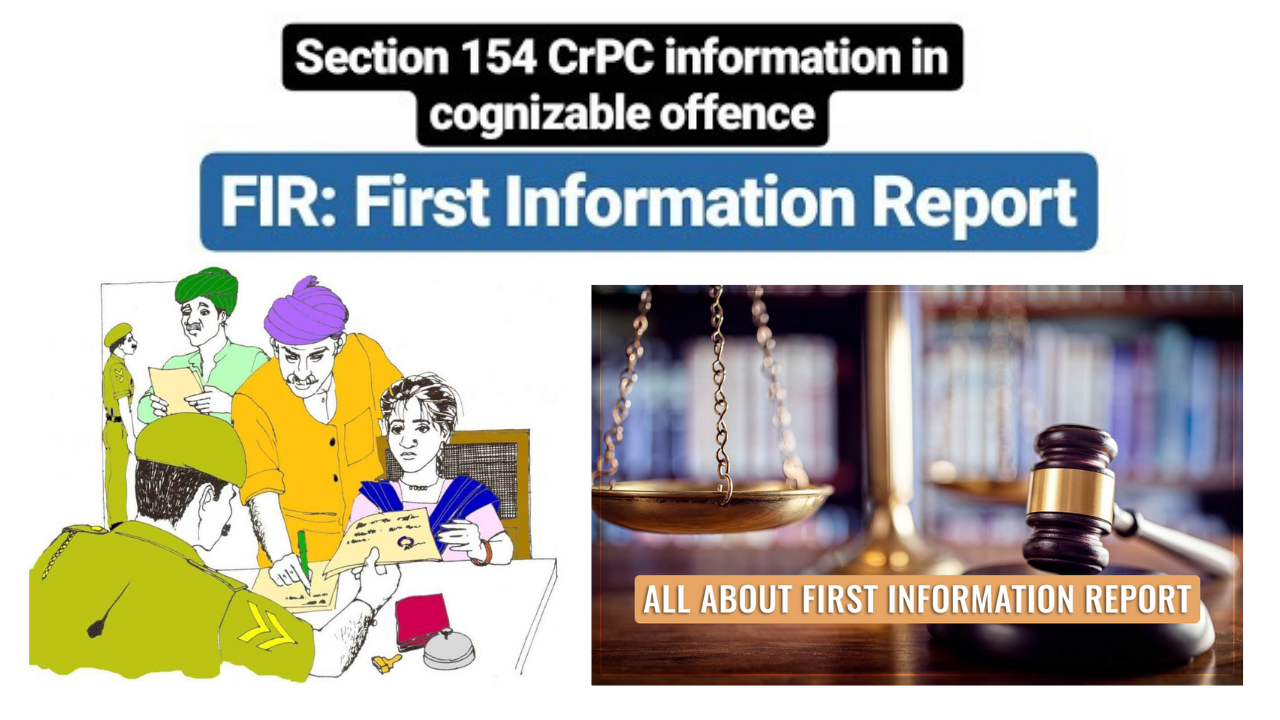 Now, as the importance of an FIR is established, one must understand the legal perspectives attached to it. Section 1541 of the Criminal Procedure Code (hereinafter referred to as CrPC), 1973, makes it clear that an FIR can be registered in cognizable offenses2 only. Cognizable crimes are those offenses in which a police officer can arrest an accused without a warrant. Due to the nature of gravity involved in the offences, police authorities can arrest without a warrant under CrPC. The classification of cognizable and non-cognizable offences is furnished under the first schedule of CrPC.

For a better understanding section 154 CrPC is extracted below:

Who can lodge an FIR?

& Ors. vs. the State of M.P,3 it was held that “Section 154 does not require that the Report must be given by a person who has personal knowledge of the incident reported. The section speaks of information relating to the commission of a cognizable offense given to an officer in charge of a police station.”

How to lodge an FIR?

How to register non-cognizable offenses?

The investigating powers of a police officer are the same in cognizable and non-cognizable offenses, except the power to arrest without a warrant. The Hon’ble Supreme Court in State Of West Bengal & Ors vs. Swapan Kumar Guha & Ors5 held that “there is no such thing like unfettered discretion in the realm of powers defined by statutes and indeed, unlimited discretion in that sphere can become a ruthless destroyer of personal freedom. The power to investigate into cognizable offenses must, therefore, be exercised strictly on the condition on which it is granted by the Code”.

What are the remedies available if the police refuse to lodge our FIR?

Although, if an FIR is refused on the ground of jurisdiction, it is mandatory for the police officer to record information about the commission of a cognizable offense and forward the same to the police station having proper jurisdiction. Otherwise, it would amount to dereliction of duty6.

This is a different channel to get the FIR registered. This remedy is similar to the process of registering a complaint for non-cognizable offenses. As through this channel, a magistrate first take cognizance of an offense under section 190 and then order for consequential investigations under section 156(3).

226 or Article 32 of the Constitution of India, directing the police officials to perform their duty and register an FIR.

Can I pursue the Judicial Remedy before the Statutory Remedy?

It is a well settled principle that an alternative remedy is not an absolute bar while filing a writ petition. In other words, it is nowhere expressly mentioned that a writ petition cannot be filed if there exists an alternative remedy. Although, on perusal of the various High Court’s and Supreme Court’s decisions, it can be concluded that ordinarily, the courts prefer and advice to first exhaust the remedies available to an informant. Some of the examples of such decisions are mentioned below:

This is not the first time that such a contention is raised before the court. This issue has been addressed by various online platforms12.

Information furnished through a telephonic message, would constitute a valid Fir or not?

There is not straight jacket answer to this proposition. Time and again it has been held by the Hon’ble Courts of our country that a telephonic conversation is generally made with an intention to gather police at the crime scene. In such cases, the telephonic conversation made between the informant and the police officer would not amount to registration of an FIR.

Whereas, the Hon’ble Supreme Court of India in Sidhartha Vashisth: Alias Manu Sharma vs State (NCT of Delhi)13 held that “Phone calls made immediately after an incident to the police constitutes an FIR only when they are not vague and cryptic. Calls purely for the reason of getting the police to the scene of crime do not necessarily constitute the FIR”. Hence, as per authors interpretation, a telephonic conversation would amount to the constitution of an FIR if the information furnished about the crime is unambiguous, clear and in detail that satisfies the above- mentioned test(not vague and cryptic).

It is very important for every individual to understand the basic concepts relating to an FIR. A complainant can understand his own case only after understanding these fundamental laws. Even a brief understanding of these concepts can be very helpful while deciding the proper course of action.