Here are some interesting facts about Mahabharata that only a few people knew. 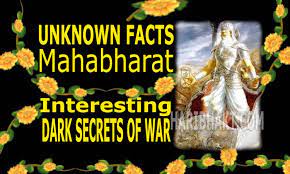 1 Abhimanyu had actually the soul of demon

Abhimanyu was actually the soul of a Daitya (demon) named Kalyavana. Krishna after burning Kalyavana to death had captured his soul and took him to Dwaraka only to stuff him into a cupboard.

According to Krishna, Abhimanyu was an incarnation of a very powerful demon named (Kalayvan) who was capable of killing him at a later point. Abhimanyu’s only weakness is his partial knowledge of Chakravyuha.

Hence the  Chakravyuha was indeed launched to kill Abhimanyu as this was the only way by which Abhimanyu could attain Moksha. Therefore, Krishna never imparts the knowledge of “how to come out of Chakravyuha to him.

At the time of war as Bhishma who was on the side of Kaurava was accused by Duryodhana for doing any harm to Pandavas and favoring them. On hearing, Bhishma became very angry and in his anger, he took five gold arrows filled it with mantras.

He vowed that the Pandavas would die before the Sunset. On the other day Duryodhana suspected that Bhisma would never do anything wrong with them so, he took those arrows with him.

Lord Krishna reminded Arjun that Duryodhana had promised him of boon and he should ask him for five golden arrows. When Arjun asked him about the arrows Duryodhana was shocked and asked him how did he know about those arrows then Arjun replied “Krishna”.

3 Bhima’s son was denied the throne

Bhima had one surviving son named Sarvaga by Balandhara, who was not given the throne despite being much elder to Parikshit. He became the ruler of Kashi (his mother’s land) instead. Interestingly the same had happened with Dhrirashtraya, his uncle, who was denied the throne due to his blindness and later became a pretext of the Kurukshetra war. History seems to have repeated itself, without gave consequences though. It is easily one of the lesser-known facts from the Mahabharata.

No many people know that he was the son of Devashrava (brother of Vasudeva) who got lost in the forest and was found by a Nishada Hiranyadhanu. Ekalavya died protecting his father during Rukmini Swayamvar.

He was killing by Krishna. For his great sacrifice of Gurudakshina Krishna blessed Ekalavya that he would be soon reincarnated and take revenge on Drona.

This person was Dhristadyumna (who kiled Drona).

5 Sahadava knew everything about the future

Bhutan vaccination success story: What we can learn?

Best Books you must read before you die